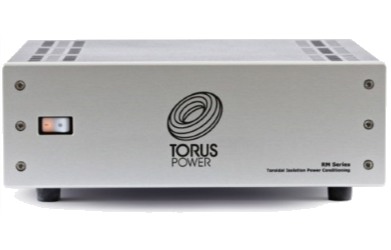 units and electric furnaces), so Torus Power’s wall-mount isolation units could potentially be used for the whole house.

The remaining product line features “box style” units that will appeal to many, with their black chassis and simple silver faceplate and no rack ears. These will look right at home in a typical equipment rack for a home-audio or home-theater system. Thus, with all of its product lines, Torus Power has covered just about every consumer base.

Torus Power products are interesting in that there’s nothing inside the chassis except a huge isolation transformer, the wiring, the backside of the AC outlets, the surge suppression devices, and a few control components (voltage regulation will be introduced soon). There are no conventional filter networks anywhere. Torus Power took a unique

approach by working with Plitron, a transformer manufacturer, to create an isolation transformer that doesn’t behave like a conventional toroidal transformer. Toroids, as commonly used and specified, do little to block high-frequency noise on the power line in either direction. The isolation toroids Torus Power uses have special design features that address higher frequencies, beginning at 2000Hz. This is a much lower frequency than you find for typical conventional Power Transformers that have filter networks using capacitors or capacitors and inductors.

encies increase to 2MHz, where it levels off at about 20dB. Torus Power’s numbers are better than those for many capacitor-based Power Transformers below 100,000Hz. Above 100,000Hz, it’s not uncommon to find similar noise-reduction capabilities in other products. Of course, the capacitor-based products don’t isolate connected components from the power line as do the Torus Power products.

Unlike most other Power Transformers, there are no capacitors used as filters in the Torus Power products. This has the hypothetical benefit of eliminating dielectric (insulator) memory from smearing audio quality. Many have speculated that the relatively large amounts of dielectric in capacitors used in Power Transformers actually retains some memory of immediately preceding audio signals. Eliminating the capacitors, then, should remove any possibility of capacitors in a power transformer having a negative impact on sound quality.

The RM 15 is one of the larger rack-mount units, measuring 19″W x 6 1/4″H x 17″D. Its fascia is black with a curved brushed-silver center section that matches the shape of the curve of the transformer inside behind the faceplate. The faceplate has an internally illuminated on/off rocker switch, and the Torus Power logo is engraved in the curved silver center section. The rack ears are an integral part of the faceplate, helping the unit to look quite good resting on an equipment-rack shelf.

The back panel contains ten AC outlets, a ground post, and an IEC socket for the power cord. Toroidal transformers large enough to deliver the rated 15 amps are large and heavy, accounting for most of the RM 15’s 76 pounds. The transformer is claimed to have design features that make it silent while operating. I never detected any noise, something that cannot be said for some other power-conditioning products employing transformers (balanced-power products primarily).

None of the hospital-grade outlets is labeled for use with an amplifier, a digital device, a video device or any of the other specific types of equipment. This is because there is a single output from the secondary side of the isolation transformer with all the outlets connected in parallel. This means all the outlets have equal current capability and it doesn’t matter which components are connected to which outlets. Most conventional Power Transformers have a filter network for each pair of AC outlets, while a few have a filter for four outlets, and others have filters for each individual outlet. This filtering is said to help remove noise generated by the connected components themselves. Torus Power has chosen not to add any additional filtering to outlet groups, pairs, or single outlets, relying on the isolation transformer to do all the filtering.

I’ve been using the components in my reference system for many years. Being so familiar with this system makes it relatively easy to detect even small changes in sound — for better or worse.

The main speakers are Vandersteen 3A Signatures with a pair of Vandersteen 2Wq subwoofers to extend bass to 20Hz. A Belles 350A Reference 250Wpc solid-state stereo amp drives the Vandersteen speakers. The preamp is the Belles Modules 28A solid-state preamp with moving-coil phono stage. The CD transport is the now-venerable Pioneer DV-525 DVD player with extensive mods to make it especially effective as a CD transport, including a replacement master clock. Digital audio processing is done by the Perpetual Technologies P-1A digital correction unit and P-3A DAC, both fed by a Monolithic power supply. LPs were played on a Roksan Xerxes turntable with a rewired SME V tonearm and a Cardas Heart ultra-low-output moving-coil cartridge.

As usual, I cleansed my palate, so to speak, connecting my system directly to the wall outlet before introducing the RM 15. And, as usual, the sound with my system powered this way was quite disappointing — dark, cloudy, flat and ill-defined. The best my system could muster in terms of soundstaging was an image the size of a small ball floating between the two speakers. This has always been my experience with wall-outlet power, whether in New York, where I used to live, or now in Colorado. But I keep checking, just to be sure. Frankly, I can’t imagine anybody being satisfied with wall-outlet power. Perhaps there are some rare components out there designed to sound great with power from the wall, but this certainly hasn’t been my experience with typical audio or home-theater products.

With the RM 15 in the system, I felt like the sound had been let out of jail. Its spirit was whole again, and it soared and emoted in ways that the system was simply not capable of otherwise. The 12″ 45rpm single of The Art of Noise’s (with Tom Jones) “Kiss” (UK Polydor/China CHINX 11 871 039-1) was merely OK with unconditioned power. With the RM 15 powering the system, it became a bona fide entertainment experience with an irresistibly powerful beat, a room-filling soundfield, spectacular dynamics, and excellent space and separation of sonic elements, even though the recording is a mostly electronic creation.

In the end, it was rather easy to hear the RM 15’s effect. Instruments and vocalists sounded more delineated within a larger space, the consequence of noise being reduced to the betterment of the music. What’s not to like about all of that?

Each time I compare Power Transformers in succession, there is a period of about an hour where the system sounds a bit off compared to how it sounded with the previous power transformer. To avoid being influenced by that transition time, I always allow at least two hours of operation before performing any evaluations. There just is no rushing when it comes to evaluating power products.

So out went the Torus Power RM 15 and in came ExactPower EP15A ($2500), an active product that samples the power line at very high frequencies, removing anything that shouldn’t be present and reconstructing an essentially perfect 60Hz 120VAC sine wave. The EP15A provides voltage regulation, extremely high wideband noise reduction (110dB specification), and very low total distortion (below 0.2%). In addition, the EP15A can deliver up to 46 amps to meet short-duration current demands, even though it is connected to a 15-amp AC outlet. EP15A was named a SoundStage! Reviewers’ Choice in 2003, and it’s one of the best units in its very crowded price range.

The EP15A produced a lower noise floor with a heightened sense of silence between notes and between tracks. It required extremely quiet listening conditions to pick this up, but it was clearly audible. The RM 15 produced a more silent noise floor than wall-outlet power, but it couldn’t equal the inky-black noise floor of the EP15A. Without the direct comparison, I don’t think I ever would have known there was a difference. Both units produced a pleasing musical experience, but the EP15A is a little more dynamic with a larger soundfield, a little more detail and some harmonic richness that’s not present with the Torus Power unit. Finally, the system’s bass reproduction with the EP15A was more controlled and defined — tighter with less upper-bass fullness. The Torus Power unit’s bass was strong and deep, but a little fuller and warmer. The EP15A produces a fair amount of heat while operating a system with a 250Wpc stereo amplifier at reasonable listening levels, while the RM 15 operates so close to room temperature that I couldn’t detect any heat at all.

Substituting Equi=Tech’s Son Of Q Jr. and Son of Q balanced-Power Transformers ($2500 for the pair) for the RM 15 produced a blacker noise floor with about the same sense of musicality and space as the RM 15. However, the transformers in the Equi=Tech units produced a low-level audible hum that could be heard from six or seven feet away, while the RM 15 was silent in operation.

As with other kinds of audio equipment, Power Transformers use varied technologies to arrive at the same claimed end product: sound that’s more realistic. The Torus Power RM 15 held its own among some stiff competition.