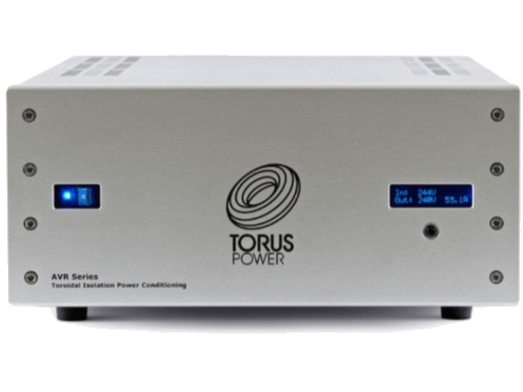 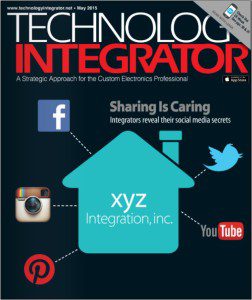 With the residential 4K Ultra HD projection market in its infancy, the huge, lifelike 4K Ultra HD projection system that the owners of a Texas Hill Country abode desired presented interesting challenges to system designer Dennis Erskine of the Erskine Group. A bright, picture-perfect 4K image was the main objective, and the homeowners were willing to make a significant investment to not only accomplish that goal, but to eek out every bit of performance from the system while safeguarding their investment from harmful power conditions and ensuring system longevity.

At the time of installation, there weren’t a lot of Ultra HD projectors available for the home market. To meet the residents’ expectation for a bright image with good black levels in a room with a whopping 13 windows,

A Crane lifts the giant screen into the home.

Erskine had to look beyond the home market to custom-engineered commercial projectors, specifying a six-figure Display Development film 4K projector and a colossal 12-foot Stewart Filmscreen StarGlas rear-projection screen, which was also custom-engineered for the project. The image from this commercial projector and the Stewart screen would be bright enough, large enough, and with requisite added resolution of 4K Ultra HD technology to satisfy the homeowners.

The rigid glass screen had to be craned into the room before walls were erected because it simply wouldn’t fit in through the proposed doorway. Accordingly, Stewart had to speed up its production schedule to get the screen into the room before construction was completed. In midstream, the homeowners decided they wanted the ability to cover the entire screen with masking when not using it. Erskine asked Stewart to fabricate and ship a Director’s Choice system, the only screen capable of a four-way variable masking system. All this painstaking customization was successful, with Erskine measuring 70 FTL off the Stewart rear-projection screen. The homeowners were ecstatic.

Clean, isolated power being is consistently fed to the system by Torus Power isolation- based power-conditioning units. Torus worked directly with Erskine to custom engineer the units to exact specification.

“The [Torus] AVR2 has a standard 240- volt in and 120-volt out. However, because this commercial projector needed 240 volts out, we asked Torus Power to modify the AVR2 to do that, and they delivered,” said Erskine. “Torus takes the 240 volts and drops it down to 120 to service all the equipment, significantly reducing line noise, hums and buzzes.” 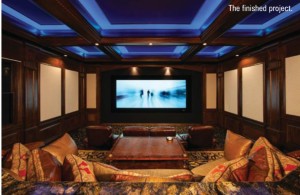 The homeowners wanted the windows to match the rest of the home, yet Erskine refused to have sound seeping in from the outside world. “With this affliction called audiophilia, we weren’t going to tolerate that,” he joked. Erskine designed a second set of doublepaned interior windows to match those on the outside. “When the theater was finished, we couldn’t even hear the workers using jackhammers to install the swimming pool outside,” he recalled. Each window has a motorized shade on the outside as well as in between the two windows for both acoustic purposes and natural light control.

The homeowners’ interior saltwater aquarium also presented some acoustical issues, primarily because it made quite a bit of noise. Erskine and his team designed a steel frame for the aquarium along with custom cabinetry to attenuate the noise pumps and motors so they wouldn’t interfere with the main attraction.

The room is completely acoustically isolated, partly due to the theater’s sound attenuation entry door, which is four feet wide and has a concrete center, causing it to weigh a whopping 450 pounds. “It’s mounted on ball-bearing hinges, so you can open it with your little finger,” Erskine said.