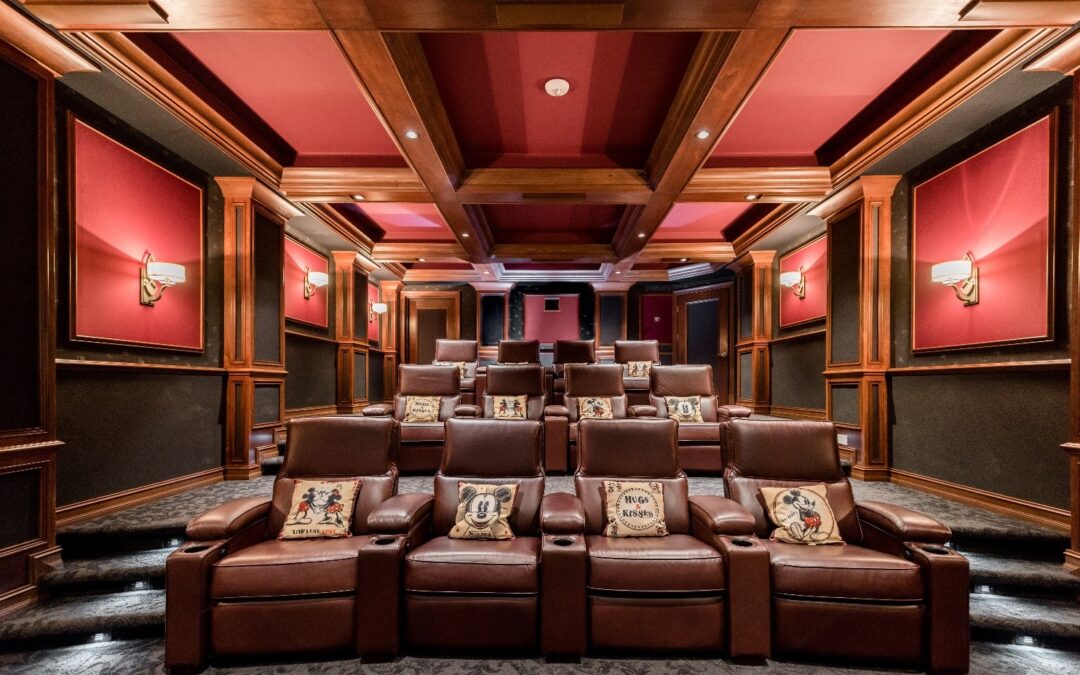 When a homeowner tells renowned acoustics and home theater design firm The Erskine Group they want a state-of-the-art home theater system without budgetary constraints, you know the result is going to be spectacular.

This particular homeowner wanted to update his ” Mickey Mouse-themed theater, affectionately called “Mouse House.” “The client told me, ‘I want to enjoy this for all it’s worth. I want a bigger screen. I want a bigger, better, faster projector, and bigger, better sound,” says The Erskine Group president and founder, Dennis Erskine.

While The Erskine Group wasn’t quite tasked with accomplishing the impossible, at times the ingenuity and creativity required came close. The Erskine Group pulled out all stops in what ultimately became a $500,000, reference-grade home theater, featuring classic millwork, custom-designed and milled in-house by the Erskine Group, world-class audio, and Dolby Atmos immersive sound.

One of the biggest challenges was delivering three-phase current into the house. “Residential homes don’t typically have three-phase current,” Erskine says. The power also needed to be clean, stable, and isolated to enable all the reference-grade components in the theater to deliver the ultimate audiovisual experience.

There are different types of residential power being delivered now in North America. Many homes use the traditional 240V power delivery that we all know. In some larger homes like this one, utilities are delivering 3-phase, 208V power that is normally used for commercial applications,” says Kevin main, President of Torus Power.

“Torus Power is flexible enough to build custom solutions for special cases and environments like these, and that is what we did here.” 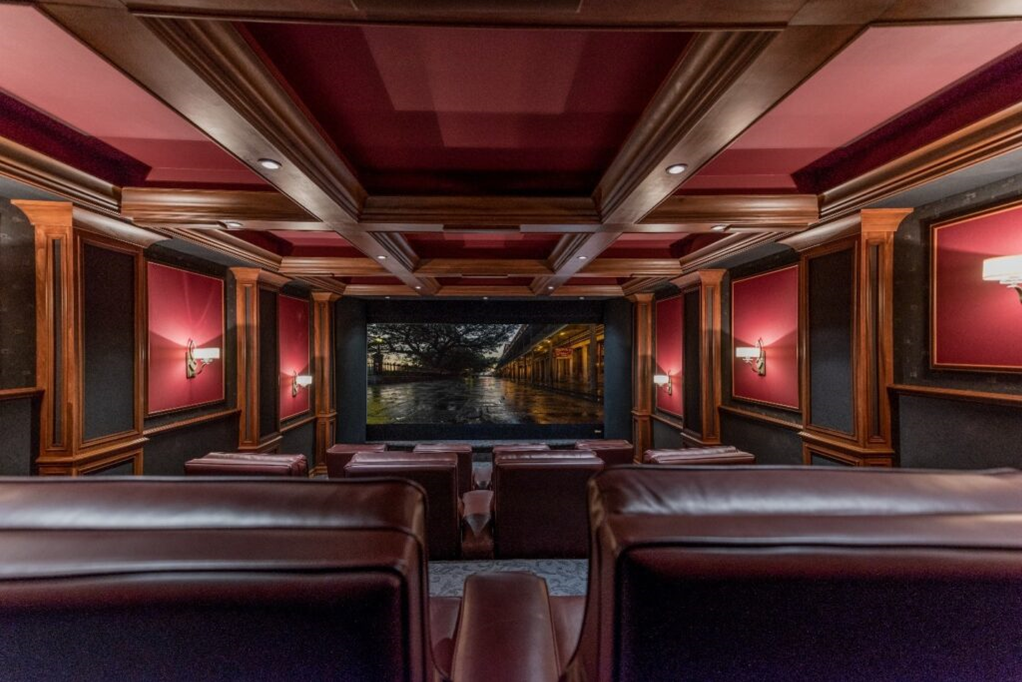 The main feed coming into the house is split into three 208V feeds on different phases evenly spaced at 120° around a center neutral. Torus worked with Erskine to specify and design a Torus Power All-in-One unit; it’s 12.5K AIO 208V, is custom-designed to run off one of the 208V phases and deliver an isolated 120V feed to all the equipment powering the theater.

Years ago when the theater was first created, the client was skeptical of the cost of a Torus Power Toroidal Isolation transformer and wondered if it would create any noticeable improvement in the technology experience. But The Erskine Group won’t sign-off on a project without installing Torus Power. “If it’s not a Torus Power unit, we are out of there,” Erskine says.

The homeowner’s reticence to spend the extra money on Torus Power could have created an impasse but, instead, Erskine urged him to research the effects of Toroidal Isolation offered by Torus Power isolation transformers.

“The client is a very intelligent engineer, so I gave him the specs, and he started doing his research. When he was done, he was sold,” Erskine recalls.

He notes that buzzes and hums can come from a variety of issues in a room, and they aren’t the most straightforward problems to track down, troubleshoot, and resolve. The Torus Power Toroidal Isolation transformer eliminates these issues, saving time and reducing the need for service calls related to “ghosts” in the system.

“We don’t want to waste time trying to track down something we might not be able to fix without a Torus Power unit, and we want to leave the room in its finished state without going back for service calls to track down buzzes and hums,” Erskine explains.

By reducing the noise floor and putting every piece of audio equipment on the same ground potential, the Torus Power unit eliminates buzz and hum that may come from other appliances in the house.

The reference-grade theater’s All-in-One unit is housed in an equipment closet near the back of the theater with the other gear, including multiple audio video sources and a Crestron CP-3 control system.

Since the room was a retrofit project, all equipment upgrades had to be integrated without damaging the existing walls and the custom-designed millwork provided by the Erskine Group. “One of the things we didn’t want to do was tear apart all the work we’d already done,” Erskine says. 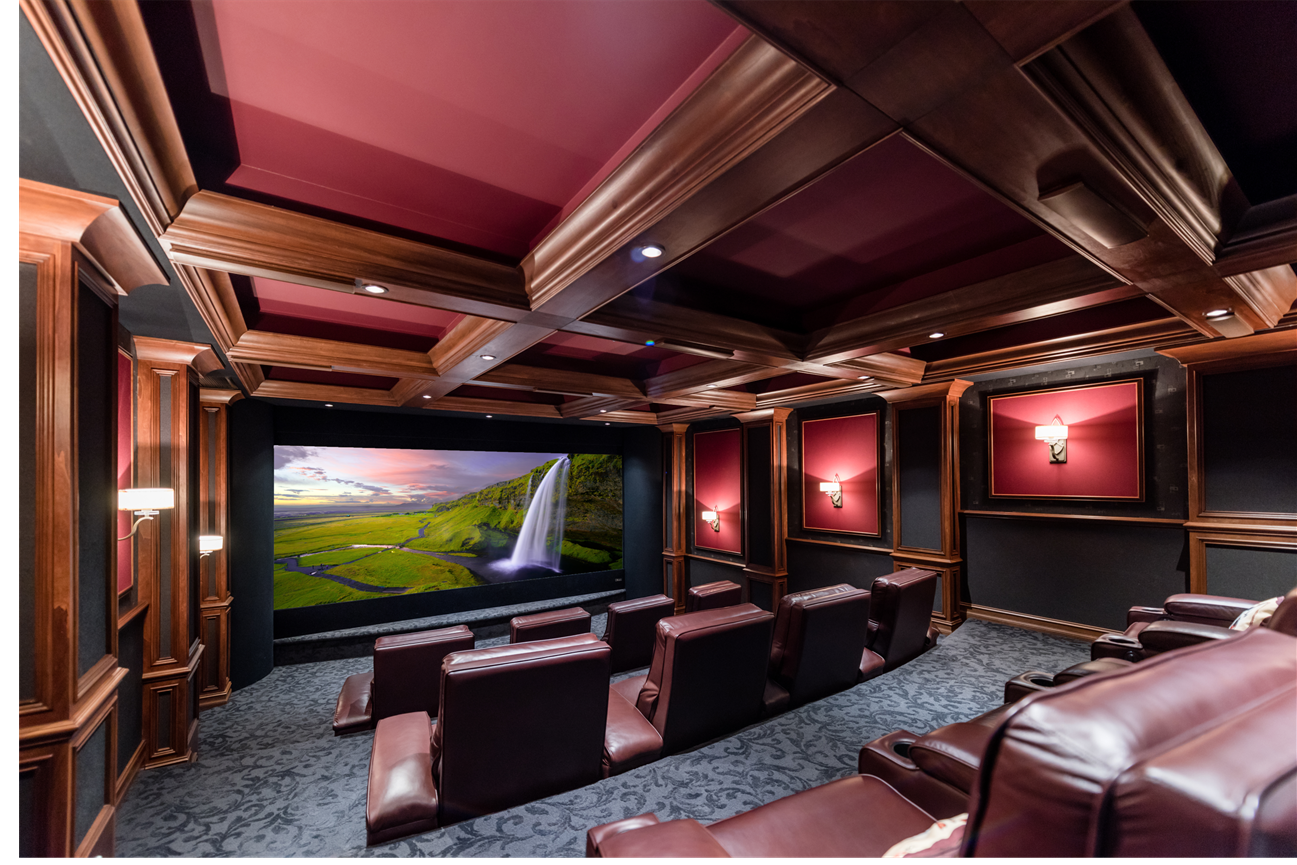 Using four subwoofers helps provide consistent response throughout the seating area, eliminating peaks and nulls within the room, which are caused by modal response. The seating platform is designed to absorb pressure, bringing the peaks and nulls closer together in terms of differential. “It’s a lot easier to calibrate a room if you don’t have modal issues at the seats,” Erskine says.

One of the reasons many home theaters fall out of use is because they’re too loud,” Erskine explains. “The softest sound on a soundtrack is 22dB. The average background noise in a quiet farmhouse is between 33 and 35dB – a factor of six times louder than the softest sound in your movie. So, if you turn up the volume to hear the whispers over the background now in the home, the actors on the screen are yelling at you. And when the time comes for the big, powerful scenes with all the sound effects, you’re clipping your amplifiers.”

Erskine approaches the problem from the perspective of working to keep outside sound out of the theater, rather than keep sound from the movie within the theater. One of the first things the team does is ensure the room is completely sealed, with no holes in the drywall. Wiring and HVAC enter the room behind a second barrier, so sound remains isolated.

Every Erskine theater, including the Mouse House, also includes a custom-designed composite door that uses a concrete core and layers of material designed to chemically absorb mid-range frequencies. The interior of the door in the Mouse House theater matches the room, while the outside matches every other door in the home.

From the sound isolation components to the speakers and projection system, along with the Torus Power All-in-One unit, every element within the Mouse House was hand-selected to create a reference grade theater that brought the homeowner’s dream to life.

“It’s an absolutely stunning picture, but you would expect that from the Barco Thor projector,” Erskine says. “The Torus Power unit ties it all together, delivering clean power to ensure the best performance from every component in the room.”