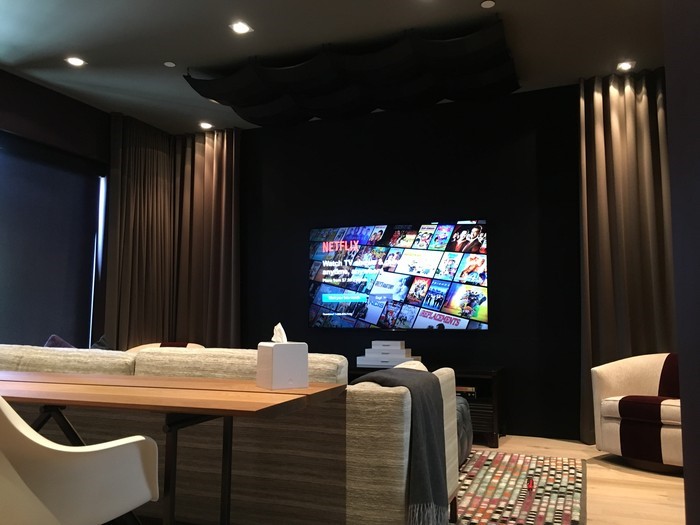 The quality of the power in any audio visual installation is too important to be left to chance. That’s one reason Acoustic Frontiers, a San Francisco-based home technology firm specializing in home theaters, listening rooms, and home studios, often installs or upgrades the electrical systems for their own projects. Relying on a member of the team who is licensed to install electric systems—but also understands audio visual design and integration—eases communication and ensures the end-to-end process delivers the best possible entertainment experience for customers.

“The foundation for AV performance is the electrical supply,” says Acoustic Frontiers President and Founder Nyal Mellor. This is something, Mellor says, electricians often don’t understand. “Typically, if the customer has power, the electrician believes their job is done. They don’t understand the point of power isolation. They don’t understand why everything shouldn’t be permanently wired into the panel, and why the AV components need to go through a power isolator. Acoustic Frontiers definitely approaches things differently than a general contractor would,” he says.

Acoustic Frontiers’ approach includes ensuring that every AV component receives a clean, steady power feed, with no buzz coming through the electrical lines to diminish the quality of audio video signals. “That’s why I use Torus Power products whenever I can to power and protect equipment,” says Mellor, pointing out features such as Narrow Bandwidth Technology, which removes noise and harmonics from incoming power lines, and series mode surge suppression, which absorbs surges any higher than 2V above peak line voltage.

“The foundation for AV performance is the electrical supply… I make the effort to run as much of the equipment as I can off a Torus Power isolation transformer.” – Nyal Mellor, Acoustic Frontiers

“I make the effort to run as much of the equipment as I can off a Torus Power isolation transformer,” he continues. “Sometimes it means cutting a hole in the wall and running new circuits.”

Such was the case in the high-end media room of a 4,000-square-foot, fully renovated and modernized Victorian-era townhouse in the heart of San Francisco. The room includes a 75-inch Sony LED TV, speakers by Procella and Martin Audio, subs by JL Audio and Artison, a Yamaha receiver, and a Torus Power TOT Max isolation transformer. The TOT Max delivers clean power to all the components in the room, as well as to a Lutron RadioRA2 and a Sonos distributed sound system, which was installed by the builder who renovated the home.

The clients had previously lived in a house with a dedicated home theater in a suburb of San Francisco, and were accustomed to high quality AV systems. They wanted the audio visual performance of a luxury cinema, in a more flexible room that could be used day or night, for watching movies, streaming Netflix, playing video games, or just hanging out. “That’s a pretty common request in Northern California,” says Mellor. “Clients just want a nice space to watch movies, TV, and hang out. It doesn’t have to be a dedicated private cinema.”

The home originally had a rudimentary media room with an HDTV and in-ceiling speakers, but nothing that met the homeowners’ expectations for audio video quality. “There aren’t any other display screens or obvious technology across the rest of the house,” explained Mellor. “There’s only this one media room where you can see technology on display, and the room gets a lot of use by the couple.”

As one of only two rooms in the house with any visible technology (the client’s home office also has a small screen), the room had to deliver a full-scale immersive entertainment experience. Acoustic Frontiers selected every piece of equipment and designed the room to achieve this objective. 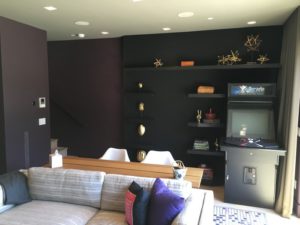 Acoustic Frontiers first designed the room layout using CAD software, providing straight-on viewing positions of the LED screen from both the couch and a sofa table where the couple sometimes enjoys meals while watching TV or a movie. Due to ambient light and the multi-purpose use of the space, Acoustic Frontiers specified a Sony Bravia 75-inch LED for optimal viewing in any lighting condition. Lutron battery-operated shades completely darken the room when a full movie experience is preferred.

The integrator also provided full acoustical design and installation services. “The main focus was to control the overall ambiance in the room, and to make it acoustically benign with no excessive echo,” says Mellor. This was accomplished primarily through diffusers on the ceiling and black fabric stretched over false walls, which were filled with low density fiberglass insulation to assist with sound damping in the front and rear of the room. Mellor and his team worked with the interior designer to ensure the room would meet all acoustic and aesthetic standards for the client.

The premise of high standards for the sound and video brings us back to the foundation of good audio visual design: clean, isolated power. Every AV component in the room, as well as the home’s smart lighting system and a pre-existing Sonos distributed audio system, terminates at the main equipment closet within the media room, plugged into a Torus Power TOT Max Toroidal Isolation transformer.

“The builder had just put up new sheetrock, and we had to put a bunch of holes in the wall to run new wiring,” says Mellor. “We had to run dedicated electrical circuits that were plugged into the Torus Power unit.”

The sacrifice, one might say, was well worth it. The 15 amp TOT Max—selected over its little brother, the 7 amp TOT Mini, in order to accommodate the whole-home technology systems as well as the AV systems in the media room—provides noise filtering, power isolation, and high instantaneous current capability through Torus Power’s proprietary technology.

“It’s a very high performance media room, and the reason I chose the Torus Power TOT Max was to further enhance that performance,” concludes Mellor.

Why This Is Important: Clean power is the foundation of any good AV system. This San Francisco media room achieves optimal performance and luxurious comfort thanks to expert audio visual design by Acoustic Frontiers and a Torus Power TOT Max isolation transformer.