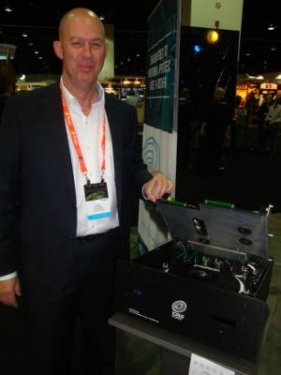 Kevin Main, shown at CEDIA Expo last year, is the new president and COO of Torus Power, which has become an independent company from Plitron Manufacturing. All rep and dealer agreements remain in place.

For Torus Power, this transition is the direct result of the company’s planned, progressive growth that has evolved over recent years. Building upon new product introductions to meet lower price points and satisfy the needs of a more diverse audience, Torus posted record sales numbers in January 2016, and is on its way to its strongest quarter ever. The company is poised for continued expansion.

Key employees have been retained and are committed to helping Torus Power reach new heights. Founder Howard Gladstone will stay on as Chairman and CEO. Kevin Main has been promoted to president and COO, and Ross Whitney will become Torus Power technical sales specialist and customer service manager. Other positions will be created and filled as needed to support Torus Power’s next phase of growth.

“By taking a dedicated and diligent approach these last few years, Torus Power has become an established and well recognized brand name in the industry. To take things to the next level, it is important for us to execute these significant steps and create our own best-in-class culture for Torus Power Inc.,” says Main. “We will continue to have a deep, ongoing relationship with Plitron Manufacturing Inc. and expect this to be a very positive change for all involved.”

To ensure a seamless transition, all existing rep and dealer agreements will be assumed by Torus Power Inc. and related efforts will continue to be managed by Main and Whitney. Torus Power products will still be built at Plitron’s Toronto factory.