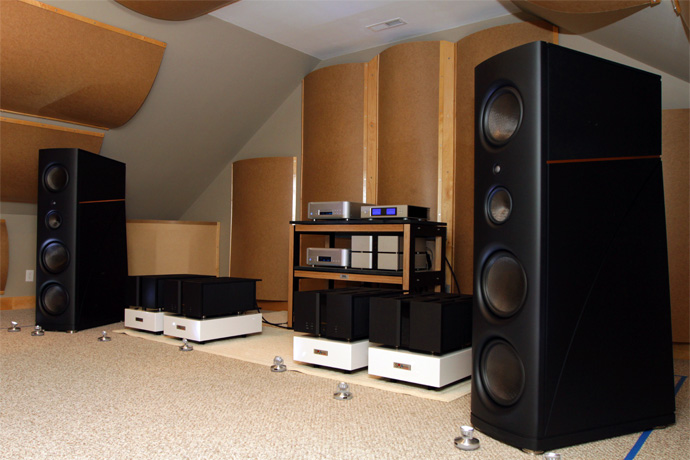 This is what it’s all about. Dialed in. Warmed up. Ultra tweaked. Here’s what I heard.

The first thing I noticed was the black-hole backdrop. The system sounded off when it was on . . . that is, before the music started. Some in the group surmised that the Torus Power units were lowering the noise floor of the entire system into nonexistence, and I must admit that I’ve never heard such a silent background in my system before. I’m certain the component isolation provided by the stunningly built Silent Running Audio racks and stands had something to do with this as well.

Notes just appeared in space, completely disconnected from the audio system. Now that’s nothing extraordinary; most of us have heard setups with this quality. But in this case it was sooo quiet that I could hear artifacts that I had never heard before in recordings that I was very familiar with — feet shuffling, slight microphone bumps, something happening way off stage. In some cases this information was not of the musical variety, but nonetheless it proved the extreme resolving power of the system.

Such a vanishingly low noise floor meant that TWBAS 2012 had a perfect jumping-off point for the unmatched-in-my-experience dynamic range. This was perhaps the most striking aspect of the sound. It wasn’t just that ability to go from very quiet to excruciatingly loud, but it did so in a completely linear and distortion-free manner. There were times that the group was listening with peak sound-pressure levels over 105dB, and none of us would have guessed it had someone not activated an SPL app from their smartphone. It occurred to me that most systems grow in scale more linearly in some frequencies than in others, compressing in the bass while soaring in the mids, or falling apart in the highs while pounding out the bass. TWBAS 2012 stayed linear and controlled from the subterranean to the ultrasonics. I attribute this to the hand-in-glove mating of the Magico Q7s with the Vitus Audio amplification.

This tandem worked as one, always in control but at the same time more than willing to unleash the awesome power of music in an instant. he resolving capability of the system allowed me to marvel at the differences in the myriad upsampling and filter options available in the Esoteric P-system_dark_690w02/D-02 combo. Several people were amazed that we could so clearly hear the differences, and then that we developed clear preferences for various combinations of settings. Also clearly apparent was the quality of high-resolution music files as, um, rendered by the WideaLab Aurender music server. At the end of the night Doug Schneider, Pete Roth, and I compared different masterings of several recordings, and we found it exceptionally easy to hear differences that I know over some systems would be hard to discern. Could the solid-core silver cables from AudioQuest also have contributed to this ultra-fine detail retrieval? 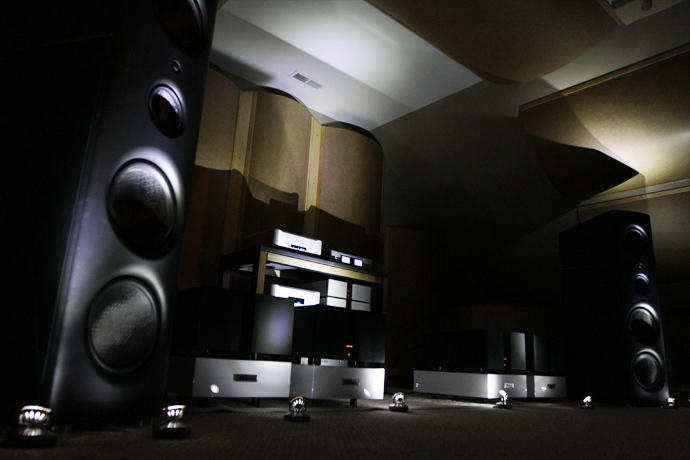 To say that I am thrilled with the synergy created by the components in TWBAS 2012 would be a severe understatement. I’ll have the system intact for a couple of weeks and will log as many hours as possible on it in an attempt to learn its strengths even better. Several in our gathering had never heard sound at such an exalted level.

Kudos should also go out to my Music Vault listening room for providing the perfect canvas for such a masterpiece of audio engineering. An acoustically neutral room is a prerequisite for a state-of-the-art audio system.

In the end, this has been the most rewarding audio project ever for me. TWBAS 2012 allowed me to make new friends and spend some quality time with folks I rarely get to see. The privilege of sharing such an amazing musical experience made it really something to remember. For once, once, I’m not thinking about how the system in my room can bettered. That might be the first time that’s happened since I was 12 years old. And now to head upstairs to listen some more.