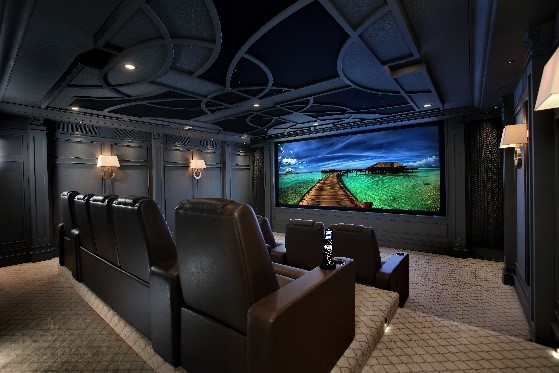 The owners of this Ontario home theater spared no expense transforming a garage basement into a movie lover’s and gamers’ paradise.

Many custom integrators and home technology professionals dream of a project where budget limits are of little consideration, acoustics comes before interior design, and the client is passionate about the technology. Station Earth designing a 10-seat home theater in the basement below a customer’s detached garage.

“The client was very involved in the process. They love this stuff!” says Scott Sherar, Station Earth – HTI sales & systems design engineer. “As such, they appreciate the level of detail and performance they’re getting.”

The client’s discerning taste—and Station Earth’s ability to specify the best in luxury audio video technology— is clear with a glimpse at the project’s equipment list. The integrator chose high-end, best-in-class components throughout, from speakers to screen, and everything in between. A Stewart Filmscreen VistaScope 175” native 2.40:1 constant height masking screen is powered by a 1080p 3D projector, with plans to upgrade to a 4K projector soon. The projector displays video from sources that include a Kaleidescape movie server and an Apple TV, as well as sources from the video matrix in the main house: a DirecTV box and a Roku streaming box.

The theater boasts a Dolby Atmos 11.4 3D sound system with speakers and amplifiers from Pro Audio Technologies and a Trinnov Audio processor. A All-in-One unit was installed to power and protect all the components. 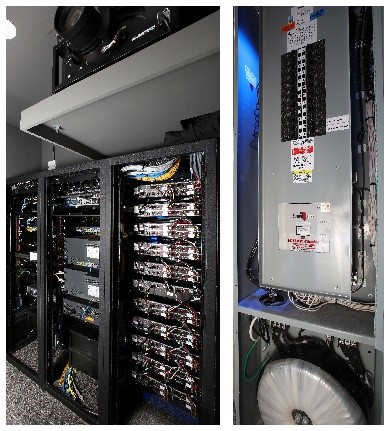 “We needed something that would support the substantial power requirements for this project and be as clean as possible,” says Sherar. “We explored all of our options, and even considered using multiple Torus Power rack-mount units.”

Ultimately, after speaking with the local manufacturer’s rep and Torus Power technical sales consultant Ross Whitney, Sherar decided on the All-in-One (AIO) unit. “We knew with the equipment list we had—which included 12 amplifiers providing more 18,000 watts of power—and the total amount of power required for the room, we needed something special. The All-in-One fit the bill.”

By using the All-in-One isolation transformer, which provides a comprehensive approach to whole system power isolation and conditioning in larger projects, Station Earth was able to run each power amplifier on its own dedicated circuit. The AIO unit offers advanced series mode surge suppression, which absorbs surges more than 2V above peak line voltage, so the derived equipment ground is not affected and the noise floor is reduced substantially. This also makes troubleshooting ground loops easier—crucial in a project of this size.

Station Earth worked with an electrician to handle the installation of the unit. Sherar called that process “clean, quick, and easy,” thanks to the nature of the All-in-One system. “Installation is easy; transportation was difficult,” he quipped, giving kudos to project manager Rod Dykstra, who not only managed the team and the installation project, but bravely carried the AIO unit down the stairs into the basement theater. 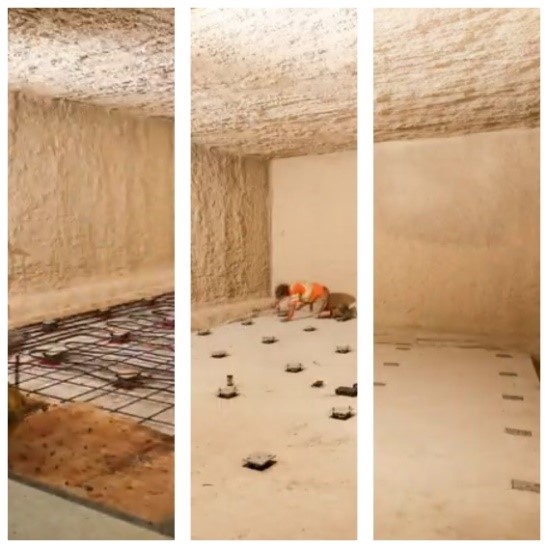 With the Torus Power unit providing the best in image fidelity and ensuring a clean audio signal, it was imperative the home theater was designed with the best lines-of-sight and acoustics possible as well. “Paradise Theaters did the acoustical modeling before a shovel went into the ground for construction,” says Sherar. “This meant the room was purpose built with audio and video in the foreground of everyone’s mind. We have over a hundred pages of design plans, acoustical reports, and pre- and post-acoustical analysis. This doesn’t happen often.”

Even with all the preparation, the basement-level room posed some unique acoustical and design challenges for the Station Earth team, which the integrators met with careful planning and dedication. The theater resides in the basement of a detached garage, connected to the main house by an underground tunnel. “The theater is about 80 feet away from a train track set down an embankment where a freight train travels a few times a day,” explains Sherar. “Of course, the clients didn’t want to hear the train while using the theater.” To prevent this, acoustical engineers measured the vibration and SPL levels resulting from the train, and then devised a system that would isolate that sound from the theater. “We came up with a spring-loaded floating floor system to isolate the extremely low—and loud—train frequencies,” says Sherar.

Just as the floor is elevated to isolate it from the ground the room was constructed to be fully isolated from the exterior room envelope, with walls built on the floating floor slab and the ceiling hung from the top wall plates. The room has its own dedicated HVAC system connected by decoupling materials for sound isolation. “The level of soundproofing in this theater is world-class,” says Sherar. 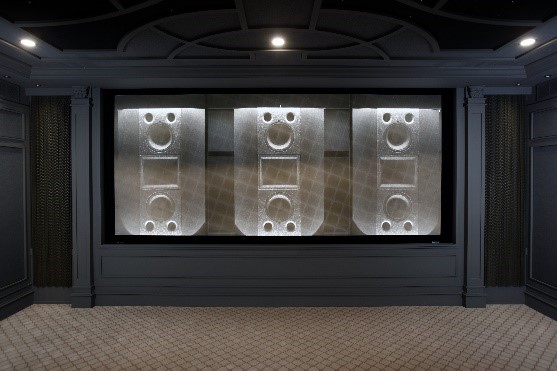 The combination of superior sound isolation, careful acoustic design, and the Torus Power All-in-One isolation transformer help create a very low noise floor, where the object-based 3D surround sound experience can really come to life. In addition, the Toroidal Isolation transformer coaxes the brightest whites, blackest blacks, and true-to-life image fidelity with virtually no interference out of the high-end projector and screen combination.

The loudspeakers disappear from sight in the room behind acoustically transparent wall coverings. For dramatic visual effect, however, Station Earth backlit the screen when not in use to show off the massive left, center, right configuration. “It looks like Photoshop in the pictures,” says Sherar. “I can assure you, it is not.”

The cool visual effect reminds visitors that audio is just as important to the overall cinematic experience, and especially in this room, where state-of-the-art audio technologies help create a fully immersive ambiance and the space was literally constructed to provide the best audio experience possible. “The overall result is a room that is almost perfect sonically. The sound in there is unbelievable,” says Sherar.

The home theater and gaming room, stocked with an Xbox One, Sony Playstations 3 and 4, and a Nintendo WiiU, is fully isolated, physically, acoustically, and—thanks to the Torus Power All-in-One—in terms of the power supply. The result is a true entertainment oasis and a place to escape the pressures of life— a space where the family can bond over video games and favorite films, entertain guests, and enjoy the ultimate home media experience.

The client sent a text to Sherar after his first evening enjoying the theater: “I thought it would sound great,” he wrote. “I was wrong. This is the best sound I’ve ever heard. This is INSANE.”